Many people say that they do not like manga, manhwa, etc. Curiously enough, I decided to check it out a while back and I'm completely loving it.


I don't like anything that dramatically takes away from "real" humans, drawing wise, and I think that's one reason why people don't like it. I have found some manga and manhwa's to be very "pretty" in my own opinion. What people don't realise, is that all art isn't the same. Sure, there are similarities to some artists, but overall, they are different.


Being asian, I feel like many people expect me to be a certain way. Grade A Student, Musical Genius, "Anime Freak", etc. Sure it's all different, but I honestly believe people have certain expectations for people.


I used to be wary over reading manhwa, korean version of manga/comics, but now I'm okay with it. I think it's probably because I'm more comfortable-and proud, that I'm korean american.

Anyways, to get to my point, I think that EVERYONE should try and give it a chance. I know that it's not for some people, but check it out anyways!


Some great ones I recommend are: 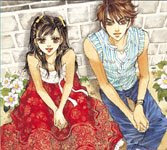 I absolutely adore manga and manhwa! I prefer them over anime for the most part. So many different ones, I love most of them! <3

I hate it too how people judge them but I get really annoyed if a non-oriental Asian is obsessed with anime and manga. I'm weird like that.