Review: The Possibilites of Fireflies 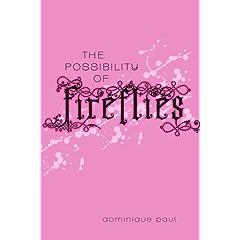 I think it is safe to say that everyone has at least one book that they truly connect with.
For me, The Possiblities of Fireflies by Dominique Paul was it.
The Possibilites of Fireflies is a coming of age story told through fourteen year old Ellie Roma. Ellie's family started to fall apart after her father left. Her mother has since become neglectful of her sister and her. She leaves Ellie waiting outside for hours while she goes out. However Ellie likes keeping company with the fireflies. She never loses hope that one day she will be saved from her life. One Day an older guy named Leo moves in next door. He is Ellie's savior.. or at least thinks he is at first. In the end Leo helps her find out the truth.. That the only person who can save you, is yourself.
This book was really outstanding. It was so easy for me to understand Ellie's emotions and the things she was going through. My mother isn't the greatest and the way she acted towards Ellie reminded me of my relationship with my mother. A book like this doesn't come around that often. Its an amazing story that will touch you and make your emotions flow. I cried through out the book. Trust me, its not hard to. If you love a story about someone who overcomes some of life's hardest situations this is for YOU. Heck, if you like a damn good read pick this up!
This is really not something you want to miss.
I am also happy to say that Domonique Paul is working on the sequel to this novel AND the motion picture! She sounds like Wonder Woman doesn't she? =]
I know that Michelle Trachtenberg is attached as the older sister Gwen. Did I mention Gwen was a party girl? Hmm, Might have missed that...
Anyways, Pick this up. I mean it. =]
There will be a contest running soon! Can anyone say free book? =]
So, until next time!
Laura
Posted by YA Book Reviewer at 9:40 PM

I really want to read this. Looks like you snatched it up before I did! =)