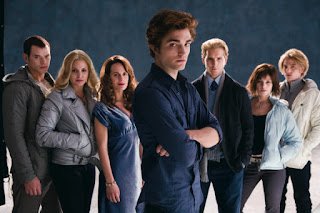 We have our Cullens!
Well, I've known for a while, but its been "officially" posted today.
The following is from Stephenie's site:
Peter Facinelli, Elizabeth Reaser, Jackson Rathbone, Nikki Reed, Ashley Greene and Kellan Lutz Join Cast of the Thriller Romance
Los Angeles, CA February 19, 2007 — Summit Entertainment announced today that it has rounded out the cast of the Cullen family in the first installment of its filmed franchise, TWILIGHT. The family of vampires, to which the leading male character Edward Cullen belongs, will be comprised of actors Peter Facinelli as Carlisle, Elizabeth Reaser as Esme, Jackson Rathbone as Jasper, Nikki Reed as Rosalie, Ashley Greene as Alice and Kellan Lutz as Emmett.
"Finding six talented actors who can portray supernaturally beautiful, talented vampires of the sort Stephenie Meyer has created and her fans have come to know and love was not an easy task but we are happy to say we have found our perfect Cullen family," said Erik Feig, Summit's President of Production.
The credits for the actors comprising the Cullen family include popular film and television titles. Peter Facinelli (THE SCORPION KING, RIDING IN CARS WITH BOYS) just completed work on the critically acclaimed first season of Damages. Reaser had roles in the comedy THE FAMILY STONE and has been seen on the hit TV series Grey's Anatomy. Rathbone was seen in PRAY FOR MORNING and also appeared in the TV series The O.C. Reed also played a role on The O.C. and also has been seen in LORDS OF DOGTOWN. Greene has been seen in both Shark and Crossing Jordan. Lutz appeared in ACCEPTED and the HBO series The Comeback.
Facinelli is represented by Paradigm and James/Levy Management. Rathbone and Reed are also represented by Paradigm. Reaser is represented by UTA. Greene and Lutz are represented by Innovative Artists.

I have to say, They look great. Except for Jackson Rathbone. I'm not so sure about his acting abilities. All I have to say is You Better Wow Me Rathbone!
Oh and doesn't Robert Pattinson look a lot better in this photo? He "cleans up" pretty good!
Posted by YA Book Reviewer at 8:49 PM

Hi,
I just started this series yesterday. (started meaning I reed both of the current books in the series yesterday...)Its called the "House of Night Series." They are really cool. Check it!