Review: Fame, Glory & Other Thing on my To Do List 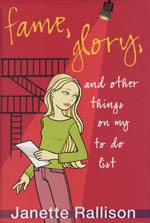 Jessica is your average teenager. She goes to school, drives, and keeps a job. One day Jessica is leaving Walmart and gets into her car. Well actually, not exactly.Turns out to be Jordan Hunter's car. Son of the famous actor Christopher Hunter. This turns out to be a big deal to her since she wants to be an actress.Later, Jessica and Hunter make a deal which will later lead to him borrowing her car. She doesn't exactly know why either.
In hopes of getting discovered, Jessica tries to get Jordan to sign up for their school production of West side story. She hopes that by getting Jordan to sign up, his dad will show up. Jordan isn't exactly the drama type though.
I thought Fame, Glory, and other things on my list was okay. It's definitely not the first time I've read something like this.It was really hard for me to get into it but after reading a few pages I didn't have any trouble finishing it. It was a light read and it definitely had its funny moments. I think those in middle school and up would take interest in this book. I think that most people will enjoy it. I was only thrown off by its tween cover.
Posted by YA Book Reviewer at 4:20 PM

This sounds like a good book. I'll have to check it out. My latest book I've read is called Archy the Flying Dolphin & the Vampire's Curse.
It's an adventurous book full of evil and danger around every corner. They have to save their Uncle Fibber from the never ending darkness. I've only read half the book so i'm not sure of the end result but it sounds like Archy may not be as great as he seems. I wonder if he's going to lead them to the vampires stew.