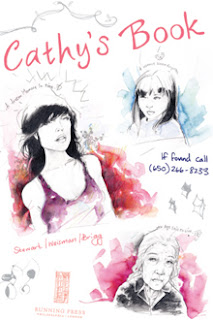 Cathy's Book is an imaginitive story about a girl named Cathy who leds a normal life until she meets a guy named Victor. Right when she begins to fall for him, Victor breaks things off suddenly. Confused, Cathy gets a little suspicious of it all and decides to look into Victor and his past. She finds herself in over her head when she discovers secrets that can change everything she's ever known.
This was probably one of the best books I've read in a while. I did not put this down until I got to the end. It was so cool having a packet of evidence and being able to interact with the story. I'm looking foward to the sequel, Cathy's Key, when it comes out May 5th! I even saw an ARC copy on ebay for like $10. I wish I had $10. . Anyways, I recommend this for someone who like a quick read and a good mystery. The only thing is that I was sort of my intrigued by the drawings and evidence than the story at times. Yes, I admit it! It got boring at some parts, but overall it was worth reading and getting.
So pick up your copy next time you visit the bookstore! Not the library though. I've heard stories of people checking it out and the evidence was stolen from it.
Did I mention you can call the phone numbers listed throughout the book? Well, you can and if your super smart like mee, you can get the acess codes to listen to the messages. ;]
Posted by YA Book Reviewer at 9:20 PM