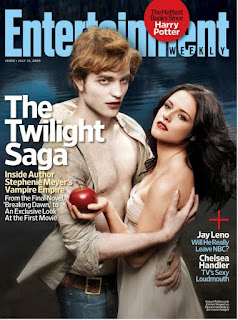 Inside, will be the first interview about Breaking Dawn with Stephenie Meyer. No spoilers will be noted inside.

I must say, Robert and Kristin have really amazing chemistry. I know it's hard to tell just by looking, but it's just there. I love this cover almost as much as the offical movie posters. I'm still a little wary about how the film is going to turn out, but I'm hopeful. Both actors are perferct for the roles and great on screen. I loved Kristen Stewart's performance in Speak! She has so much talent-and so does Robert, gahh, I'm just excited. It's not everyday your favorite book is greenlighted to be a film and the actors an absolute perfect match. My worst nightmare for the film would have to be it being rated PG.

There is no way, that I could enjoy this movie if it was. I highly doubt it, but you know. If it was, that would mean that a lot of scenes from the book were cut. && I totally get that everything in the book can get fitted in, but still. I'm hoping for certain scenes to be in there.

I'm still having a hard time with Taylor Lautner, aka Sharkboy, as Jacob. I mean, didn't they do this big search for a Native American guy to play him and they end up casting him? He's not NA and it just pisses me off. I don't know why. I feel like Taylor or Jackson Rathbone will be Twilight's downfall. I have barely any faith in those two. Jasper is one of my favorite characters and they cast Rathbone? Words could not fully describe my feelings when I found out.

Anyways, I'm going to try and give Sharkboy and Mr. Disney 411 the benefit of the doubt. It'll be hard, but for myself and the movie, I will.

So, hopefully, if your a fan of Twilight, you'll pick this issue up Friday! I'm pretty anxious for the interview. :D

Posted by YA Book Reviewer at 7:14 PM

I'm looking forward to seeing this movie, even though i didnt take much interest in the book.....it changes my whole view of twilight saga when i see previews of it.